Hundreds of Kenyan professionals; businessmen and women; policy makers; politicians; observers; and holiday makers were among nearly 23,000 people who thronged Kuala Lumpur Convention Centre and other sites in Malaysia for the ninth session of the World Urban Forum (WUF9).

Way before the conference opening on February 7, Kuala Lumpur was a beehive of activities as residents of 165 countries across the globe busied themselves with preparations for the rotational event that happens every two years. Their effort was evident in the outcome. 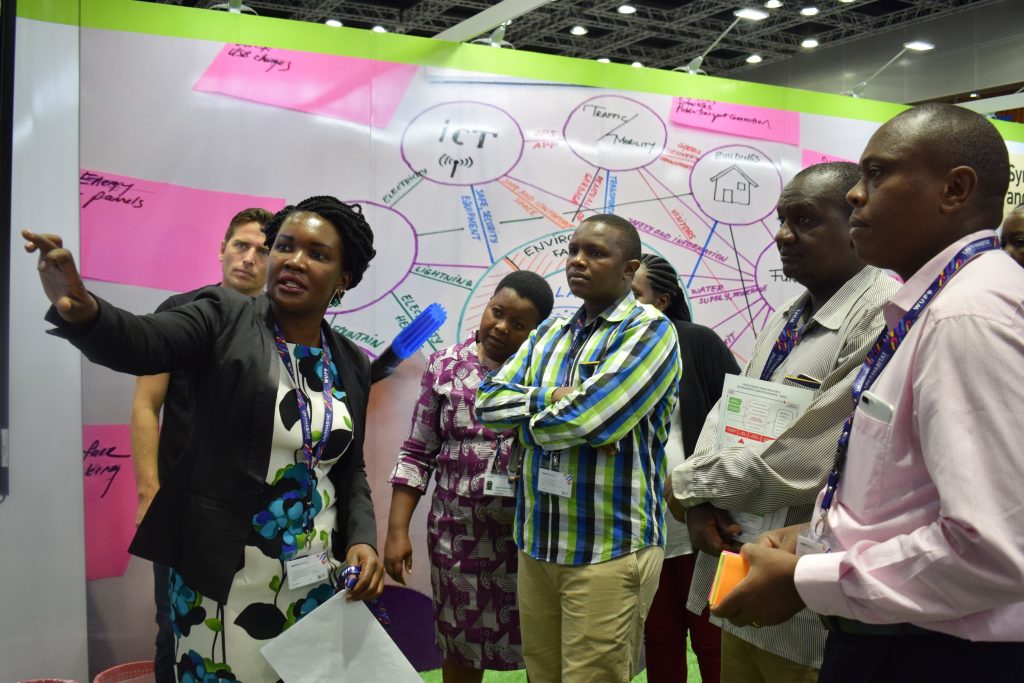 SymbioCity Kenya at the conference booth.

For the Kenyan participants, “Cities 2030 – Cities For All: Implementing the New Urban Agenda” was a befitting conference theme, coming in the wake of the passing of the National Urban Development Policy in December 2017, and the country’s efforts to implement the New Urban Agenda (NUA).

NUA was adopted at the Habitat III conference in Quito, Ecuador, in 2016. Kenya is a signatory of NUA by virtue of being a state party to UN-Habitat. Implementation of NUA in Kenya is a collaborative affair with partners including the National Government; County Governments; development partners; the private sector and civil society organisations (CSOs).

Urban boards help advance government efforts
“From listening to conference discussions, Kenya is definitely on the right track,” stated Charles Otieno Konyango, the Director of Housing and Urban Development in the Ministry of Lands, Kenya. “The government is leading the process, and towards this end, we are progressing well with the creation of Urban Boards, with groundwork laid to ensure that the processes are consultative and inclusive.”

Kenya’s Urban Areas and Cities Act (UACA) 2011, directs the establishment of urban boards to facilitate management of cities and municipalities at the counties. The Boards are expected to facilitate the government’s efforts to implement NUA and anchor it into the Counties’ Integrated Development Plans. Mr Konyango states that a civil society organisation, Urban Boards Non-state Agencies (UBNA), is in the process of identifying organisations that can nominate members to sit in the boards, after which the body will induct and educate the Boards at the county assemblies.

Kenya’s civil society monitor urban development
George Wasonga, the Executive Director of Civil Society Urban Development Platform (CSUDP), agrees that the Kenya Government has already delivered an implementation framework, which incorporates the NUA agenda into the country’s Vision 2030. “This means that the government is not deviating from its national strategic agenda to implement a global concern, which is a good thing,” he states.

The urban development practitioner however states that unlike other countries, Kenya lacks the critical local government tier in its governance structure, which takes care of urban areas. And whereas the urban boards are envisioned to take care of this space, George who is a member of the UBNA, states that its actualisation has been slow and difficult. This is because counties may not easily delegate their key sources of revenue, which is the urban areas, to the Boards. “The new structure may lead to power weaknesses based on resource management.”

Public-private partnership to bring affordable housing
At the opening ceremony, newly appointed Executive Director for UN-Habitat, Ms Maimunah Mohd Sharif, had stressed the role of partnerships between the public and private sector as being key in the implementation of the NUA. She set the tone for many delegates who emphasised the importance of public, private and civil society cooperation in the achievement of the NUA.

The incoming Urban Development Committee (UDC) Chairman at the Council of Governors (CoG) Kenya, Governor Ferdinand Waititu, reiterated the importance of partnership in the implementation of the national government’s flagship housing project.

According to Waititu, the project foresees the generation of 1 million housing units in the next five years. Of the planned houses, 800,000 will be affordable units to be developed collaboratively between the private sector investors and the government. The other 200,000 units fall exclusively within the government’s slum upgrading programme.