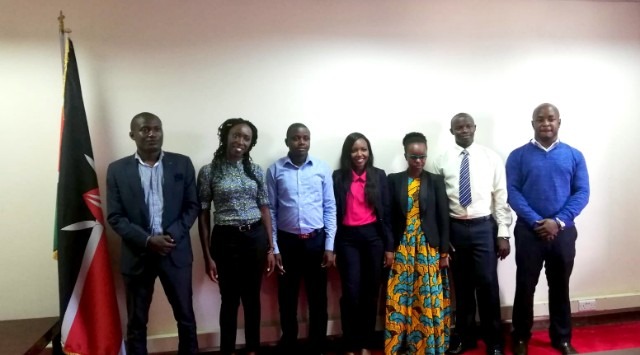 Seven Operations Managers have joined SymbioCity Kenya to oversee the completion of the seven pilot projects in Kenyan small towns. As the deadline for the programme draws nearer, efficient coordination during the last months are crucial. All the Counties are working hard to build their urban improvements, designed through inclusive processes.

The SymbioCity Kenya team in Nairobi met with their implementing partner, the Swedish Association for Local Authorities and Regions (SALAR), earlier this month to plan for the final push. With funds being dispersed centrally from the Council of Governors and SALAR to the seven Counties piloting inclusive approaches to urban development, coordination is crucial.

“We are now in the final six months of the programme, during which Counties will finalize urban Change Projects in selected Pilot towns. A lot has to happen during this period, and the challenge is to ensure efficient delivery with procurement and payment procedures being shared between County and CoG levels,” says Mariam Ndaru, Admin Officer at the CoG who has worked closely with the Council’s Urban Support Team the past few years.

To help ensure smooth implementation on the ground seven Operations Managers have been hired earlier this year, each of them based in one of the localities with ongoing Change Projects.

“My role is to oversee works here in Kiminini,” explains Diana Modani, Operations Manager for Kiminini in Trans Nzoia County, “and to act as a communication link between the town, County, the SymbioCity programme and the CoG, between financiers and suppliers, and also between local stakeholders and residents who were part of the problem analysis and visioning of the town. Inclusive urban planning is complex!”

Top photo caption: The Operations Managers gathered at the CoG office in Nairobi in May.